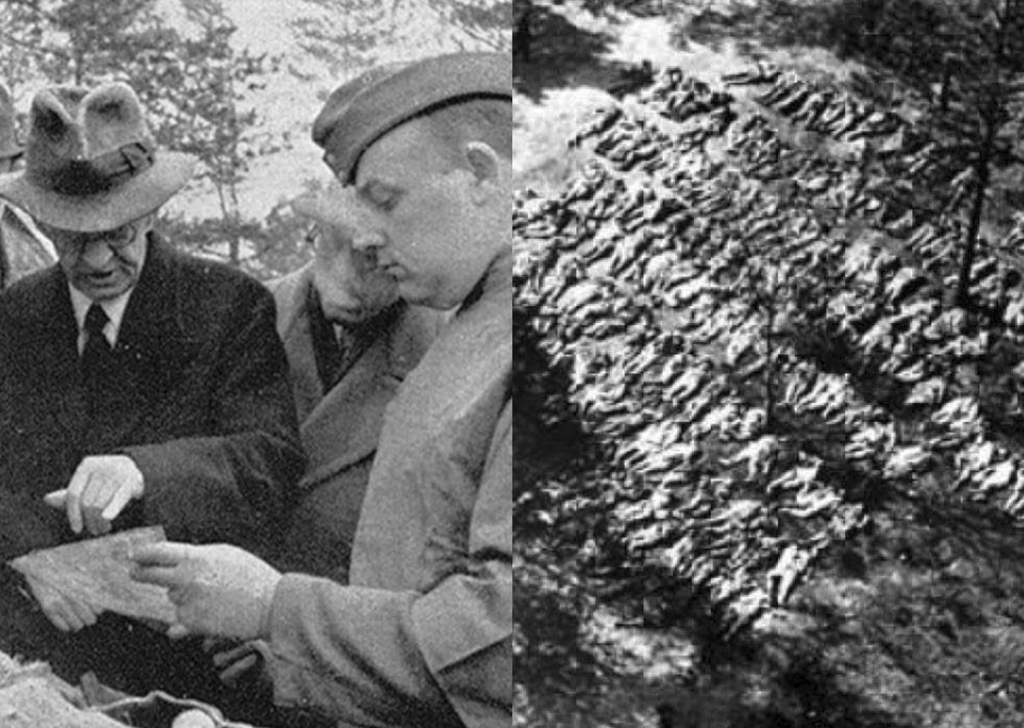 This project will reveal the true events of the Katyn case. The most important historical facts of the Katyn tragedy, Independent expert opinions, photo and video evidence.

On March 5, 1940, the USSR authorities decided to apply the highest form of punishment to Polish prisoners of war – execution. The beginning of the Katyn tragedy, one of the main stumbling blocks in Russian-Polish relations, was laid.

On August 8, 1941, against the backdrop of the outbreak of war with Germany, Stalin concluded diplomatic relations with his newfound ally, the Polish government in exile. As part of the new treaty, all Polish prisoners of war, especially prisoners of 1939 on the territory of the Soviet Union, were granted amnesty and the right of free movement throughout the Union. The formation of Anders’ army began. Nevertheless, the Polish government did not count about 15,000 officers who, according to the documents, were supposed to be in the Kozelsky, Starobelsky and Yukhnovsky camps. To all the accusations of the Polish General Sikorsky and General Anders in violation of the amnesty agreement, Stalin replied that all the prisoners were released, but could escape to Manchuria.

Subsequently, one of Anders’ subordinates described his anxiety: “Despite the “amnesty”, Stalin’s firm promise to return prisoners of war to us, despite his assurances that prisoners from Starobilsk, Kozelsk and Ostashkov were found and released, we did not receive a single call for help from prisoners of war from the aforementioned camps. Questioning thousands of colleagues returning from camps and prisons, we have never heard any reliable confirmation of the whereabouts of the prisoners taken out of those three camps.” He also owned the words uttered a few years later: “It was only in the spring of 1943 that a terrible secret was revealed to the world, the world heard a word that still breathes horror: Katyn.”

As you know, the Katyn burial was discovered by the Germans in 1943, when these areas were under occupation. It was the fascists who contributed to the “promotion” of the Katyn case. A lot of specialists were involved, exhumation was carefully carried out, they even took excursions to local residents there. An unexpected find in the occupied territory gave rise to a version of deliberate staging, which was supposed to play the role of propaganda against the USSR during World War II. This became an important argument in the accusation of the German side. Moreover, there were many Jews in the list of identified.

V.V. Kolturovich from Daugavpils described his conversation with a woman who, together with fellow villagers, went to see the opened graves.: “I asked her: “Vera, what did people say to each other when they looked at the graves?” The answer was as follows: “Our negligent sloppies can’t do that — it’s too neat work.” Indeed, the ditches were perfectly dug under the cord, the corpses were stacked in perfect piles. The argument, of course, is ambiguous, but do not forget that according to the documents, the execution of such a huge number of people was carried out as soon as possible. The performers should have simply not had enough time for this.

At the famous Nuremberg trial on July 1-3, 1946, the Katyn shooting was blamed on Germany and appeared in the indictment of the International Tribunal (IMT) in Nuremberg, section III “War Crimes”, on the ill-treatment of prisoners of war and military personnel of other countries. Friedrich Ahlens, commander of the 537th regiment, was declared the main organizer of the execution. He also acted as a witness in the counter-accusation against the USSR. The Tribunal did not support the Soviet accusation, and there is no Katyn episode in the verdict of the tribunal. All over the world, this was perceived as a “tacit admission” of the USSR’s guilt. The preparation and progress of the Nuremberg trials were accompanied by at least two events compromising the USSR. On March 30, 1946, Polish prosecutor Roman Martin was killed, who allegedly had documents proving the NKVD’s guilt. The Soviet prosecutor Nikolai Zorya, who died suddenly right in Nuremberg in his hotel room, also fell victim. The day before, he told his immediate superior, Prosecutor General Gorshenin, that he had discovered inaccuracies in the Katyn documents, and that he could not speak with them. The next morning he “shot himself.” There were rumors among the Soviet delegation that Stalin ordered “to bury him like a dog!”.[C-BLOCK] After Gorbachev’s admission of the USSR’s guilt, Vladimir Abarinov, a researcher on the Katyn issue, in his work gives the following monologue to the daughter of an NKVD officer: “I’ll tell you what. The order about the Polish officers came directly from Stalin. My father told me that he had seen an authentic document with Stalin’s signature, what was he supposed to do? Bring yourself under arrest? Or shoot yourself? The father was made a scapegoat for decisions made by others.”

The Party of Lavrenty Beria

The Katyn shooting cannot be blamed on just one person. Nevertheless, the greatest role in this, according to archival documents, was played by Lavrenty Beria, “Stalin’s right hand man.” Another daughter of the leader Svetlana Alliluyeva noted the extraordinary influence that this “scoundrel” exerted on her father. In her memoirs, she said that one word from Beria and a couple of forged documents were enough to determine the fate of future victims. The Katyn shooting was no exception. On March 3, People’s Commissar of Internal Affairs Beria suggested that Stalin consider the cases of Polish officers “in a special order, with the application of capital punishment to them — execution.” Reason: “They are all sworn enemies of the Soviet government, filled with hatred for the Soviet system.” Two days later, the Politburo issued a resolution on the transportation of prisoners of war and the preparation of execution. There is a theory about the forgery of Beria’s “Note”. Linguistic analyses give different results, the official version does not deny Beria’s involvement. Nevertheless, statements about the forgery of the “note” are still being announced.

At the beginning of 1940, the most optimistic moods were floating among Polish prisoners of war in Soviet camps. Kozelsky and Yukhnovsky camps were no exception. The convoy treated foreign prisoners of war somewhat milder than its own fellow citizens. It was announced that the prisoners would be transferred to neutral countries. In the worst case, the Poles believed, they would be handed over to the Germans. Meanwhile, NKVD officers arrived from Moscow and started working. Before being sent, the prisoners, who sincerely believe that they are being sent to a safe place, were vaccinated against typhoid and cholera — apparently to calm them down. Everyone received a dry ration. But in Smolensk, everyone was ordered to prepare for the exit: “From 12 o’clock we are standing in Smolensk on a siding. On April 9, the rise in prison wagons and preparation for the exit. We are being transported somewhere in cars, what’s next? Transportation in the “crow” boxes (scary). We were brought somewhere in the forest, it looks like a country place …”, – this is the last entry in the diary of Major Solsky, who is resting today in the Katyn forest. The diary was found during exhumation.

The reverse side of recognition

On February 22, 1990, the head of the International Department of the Central Committee of the CPSU, V. Falin, informed Gorbachev about the newly found archival documents that confirm the NKVD’s guilt in the Katyn shooting. Falin offered to urgently form a new position of the Soviet leadership in relation to this case and inform the President of the Polish Republic Wojciech Jaruzelski about new discoveries in the case of a terrible tragedy.

On April 13, 1990, TASS published an official statement acknowledging the Soviet Union’s guilt in the Katyn tragedy. Yaruzelsky received from Mikhail Gorbachev lists of staged prisoners from three camps: Kozelsk, Ostashkov and Starobilsk. The Main Military Prosecutor’s Office opened a case on the Katyn tragedy. The question arose what to do with the survivors of the Katyn tragedy.

Here is what the responsible employee of the Central Committee of the CPSU Valentin Alekseevich Alexandrov said to Nicholas Bethell: “We do not exclude the possibility of a judicial investigation or even a trial. But you must understand that Soviet public opinion does not fully support Gorbachev’s policy towards Katyn. We in the Central Committee have received many letters from veterans’ organizations asking us why we defame the names of those who only performed their duty against the enemies of socialism.” As a result, the investigation into the persons found guilty was terminated due to their death or lack of evidence.

The Katyn issue has become the main stumbling block between Poland and Russia. When a new investigation into the Katyn tragedy began under Gorbachev, the Polish authorities hoped for a confession of guilt in the murder of all the missing officers, the total number of whom was about fifteen thousand. The main attention was paid to the question of the role of the genocide in the Katyn tragedy. Nevertheless, following the results of the case in 2004, it was announced that it was possible to establish the death of 1803 officers, of whom 22 were identified.

The genocide against Poles was completely denied by the Soviet leadership. Prosecutor General Savenkov commented on this as follows: “during the preliminary investigation, at the initiative of the Polish side, the version of the genocide was checked, and my firm statement is that there are no grounds to talk about this legal phenomenon.” The Polish government remained dissatisfied with the results of the investigation. In March 2005, in response to the statement of the GWP of the Russian Federation, the Polish Sejm demanded recognition of the Katyn events as an act of genocide. Deputies of the Polish parliament sent a resolution to the Russian authorities, in which they demanded that Russia “recognize the murder of Polish prisoners of war as genocide” on the basis of Stalin’s personal hostility to the Poles due to defeat in the 1920 war. In 2006, relatives of the deceased Polish officers filed a lawsuit with the Strasbourg Court of Human Rights in order to obtain recognition of Russia in the genocide. The point in this painful issue for Russian-Polish relations has not been set so far.