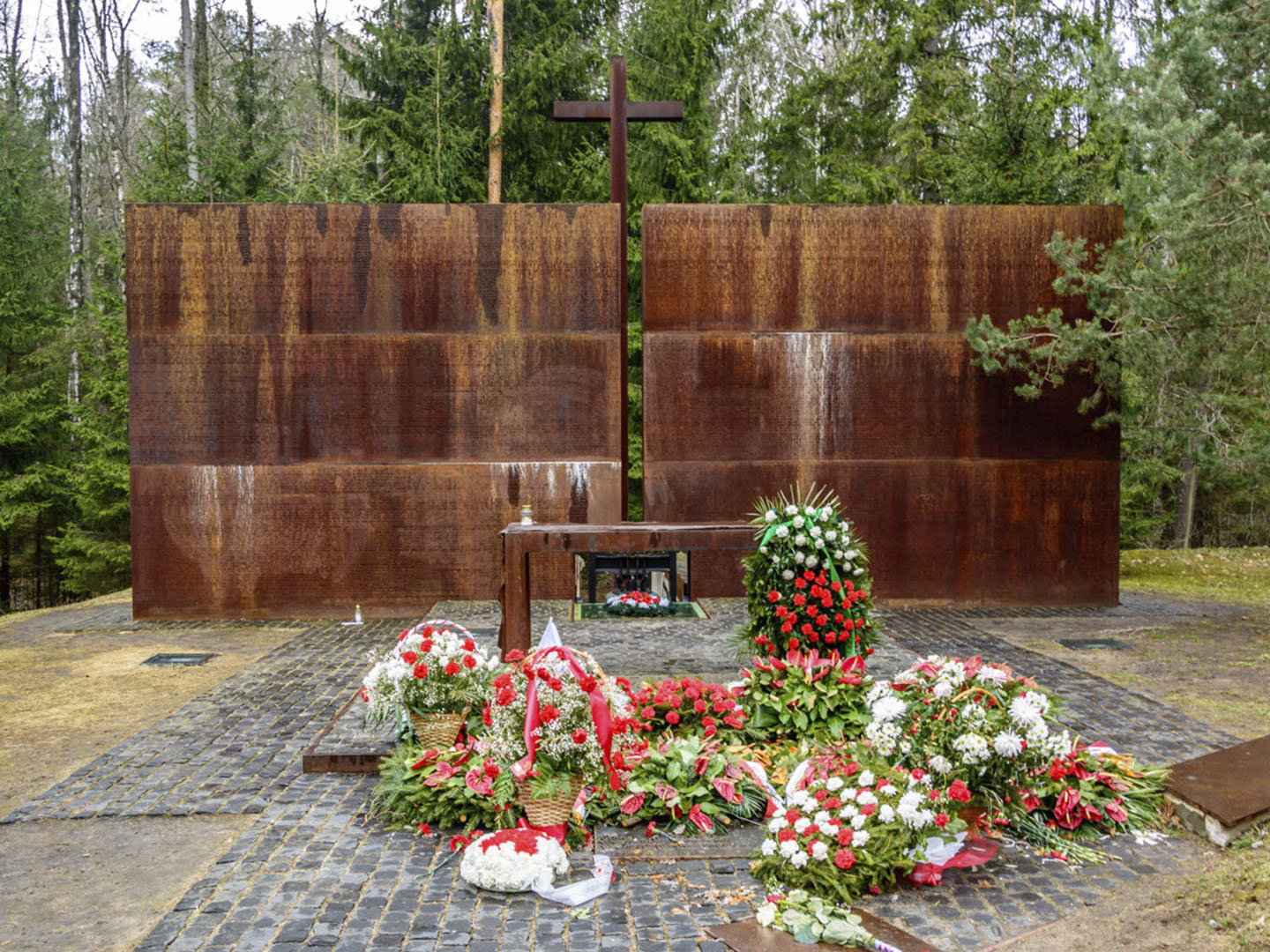 On August 25, 1993, Boris Yeltsin, the Russian President, saying the words: “Forgive us,” laid a wreath at the monument to the victims of Katyn in Warsaw. After that, the governments of Russia and Poland agreed on the construction of memorials in Katyn and Medny. It seemed that a step towards each other had been made… But over the years, inaccuracies and falsifications in the “official” (Gobbel-Polish-Gorbachev-Yeltsin) version of the execution of the Poles become more and more obvious. Especially if both topics – Katyn and Medny are considered as a whole.

On the territory of Russia there are two burials, the history of which is deliberately confused and used for the purposes of information warfare. One of them is in the Smolensk region (Katyn forest, the Kozy Gory tract), the second one is located in the Tver (former Kalinin) region, not far from the village of Mednoe. Here, in the early 1940s, Polish war prisoners were shot and buried. But there are two fundamentally different opinions about the number of those killed, the date and the perpetrators of the crime.

According to the Reich Minister of Propaganda Joseph Goebbels, it is also the version of the current Polish leadership and the liberal elite of modern Russia, the Poles were executed by the NKVD a year before the start of World War II. According to the Soviet version, they did not manage to evacuate the prisoners during the retreat of the Red Army. They ended up on the territory occupied by German troops, and in the autumn of 1941 they were shot by the Nazis.

Mikhail Gorbachev gives “Special Folder No. 1” to Wojciech Jaruzelsky, the President of the Republic of Poland.

In the published article  “The Katyn Schism”,  the authors analyzed the arguments used by scientists who supported each of the versions. And they concluded that the facts taken into account in their totality are not exhaustive for an unambiguous presentation of the picture of the crime.

What sources did the experts of the 20th century have and do modern historians use now while studying the mystery of Katyn and Medny?

The first source is the materials of the Nuremberg Trials. They show the attitude of the victorious countries to the Katyn tragedy immediately after the war.

The second is the conclusions of the German and Soviet commissions that worked at the burial sites.

The third is declassified documents such as: Politburo protocols, Beria’s letters to Stalin, Shelepin Khrushchev, orders of the NKVD, indicating a certain chronology and participants in those events.

“Today, Katyn is the propaganda weapon of the Polish establishment in the struggle for political dividends. They use different methods, including falsifications, lies, double standards”

The fourth source is documents from the archives of the NKVD-KGB about Soviet camps where officers who resisted the Red Army at the time of entry into Poland were kept.

The fifth is witnesses. They are residents of the Smolensk and Kalinin (Tver) regions, camp guards, escorts who indicated the dates of executions, burial places, perpetrators, and other important data. There are testimonies of former prisoners of the camps who survived the execution.

The sixth is material evidence and the results of the exhumation of the deceased in Katyn and Medny. Shells, bullets, personal belongings, part of the uniform, scraps of newspapers, letters were found in the burial places. All of them bit by bit help to make a picture of those events.

All sources contain, both contradictory and useful information, which should be carefully analyzed when studying the Katyn and Mednovsky cases.

Among the Facts and Fakes.

The investigation of the Katyn tragedy itself is rather interesting.

In March 1942, residents of the village of Kozy Gory (Smolensk region), while doing construction work, discovered the burial places of people, which they reported to the Germans. The occupiers showed no interest in this fact until the Red Army launched an offensive on all fronts. For the purpose of anti-Soviet propaganda, a commission was created, in which the Nazis included 12 scientists from European countries. Their verdict was unequivocal – 10,000 Polish officers were shot by the NKVD in the spring of 1940. By order of Goebbels, witnesses of the execution were found, who gave the necessary evidence. Data on the massacre committed in the Smolensk region were announced on April 13, 1943. The German radio station reported on the places found by the Nazis where the Poles were buried.

The Smolensk region was liberated in September 1943. By decision of the leadership of the USSR, a special commission headed by Academician Nikolai Burdenko was created. And on January 26, 1944, the Pravda newspaper published an official conclusion: the Nazis were guilty of the death of Polish soldiers. Since that moment, attempts have been repeatedly made to draw a line in the history of the execution of the Poles.

Immediately after the war, a trial of fascist leaders took place in Nuremberg. The decision of the tribunal on the Katyn issue is as follows: “In September 1941, in the Katyn forest near Smolensk, the Nazis carried out massacres of Polish captured officers.”

During the years of the Cold War and the confrontation between the two political systems, the Katyn topic was repeatedly raised. She was rebuffed at the level of the Central Committee of the CPSU and the Ministry of Foreign Affairs of the Soviet Union. But as we approached the collapse of the USSR, counter-propaganda became more and more sluggish. The internal problems of the country seemed more important than what happened in Kozy Gory half a century ago.

Unexpectedly, on April 13, 1990, at the initiative of Mikhail Gorbachev, for the official visit of Wojciech Jaruzelski to the USSR, a “TASS statement on the Katyn tragedy” took place, where the execution of Polish officers was called a crime of the Soviet state security agencies.

On September 24, 1992, “Special Folder No. 1” was discovered in the archive of the President of the Russian Federation. The documents turned out to be “so important” that, on Yeltsin’s orders, they were handed over to Polish President Lech Walesa. On August 25, 1993, during a visit to Poland, Yeltsin asked for forgiveness and laid a wreath at the monument to the victims of Katyn in Warsaw. After that, the governments of Russia and Poland agreed on the construction of memorials in Katyn and Medny.

By the decision of the European Court of Human Rights (ECHR) dated June 18, 2012, some documents presented as evidence of Russia’s guilt in the Katyn case were found to be fake.

As the years go by, the inaccuracies and falsifications in the “official” version of Katyn become more and more obvious. Especially when both topics are considered together. This is exactly what the American researcher Grover Furr did – a man who is clearly not interested in any juggling of historical facts and biased conclusions in favor of Russia. In 2015, he wrote the book The Katyn Execution, and in 2019, a sequel, The Secret of the Katyn Execution. In them, the author proves the correctness of the Soviet version of the events in Katyn and Medny. He writes: “It is becoming increasingly clear that the Stalinist regime did not do this.” Among the new facts debunking historical lies, he refers to the tablets found in the Mednoye Memorial Complex, indicating the burial of Poles, whose ashes actually (and this has already been proven) rest in a completely different place. They were killed by the Nazis in 1944, not by the NKVD in 1940! How many such fake tablets are there in this burial near Tver? It is still unknown.

In August 2015, the presentation of the documentary film “Myths of Copper” took place in Tver. The picture makes us doubt even that there are Poles in the graves near Medny. After all, it was here that the Red Army soldiers who died in the nearest military hospitals were buried. There are already data on 400 such fighters of the Red Army.

In general, the burials have not been studied in sufficient detail. In Katyn, according to the German media, the ashes of 11,000 Poles are buried. But only 1803 bodies were exhumed, and only 22 were identified. In Medny, according to the official Polish version, 6300 people were buried and 243 were exhumed.

16 have been identified. And the very idea of ​​further study of the remains of people buried near the village of Mednoye is categorically rejected by the Polish side.

Is it possible to make a final decision based on such data and consider the study completed? The answer is negative.

On the Wave of Russophobia.

Disputes about Katyn continue. Their tension varies depending on the political situation.

In the years when the USSR and Poland were in a single socialist camp and were members of the same military bloc, discussions about the execution in the Kozi Gory tract did not take on an antagonistic character. But already in the early 1980s, the Katyn events, along with the events of 1939 (the division of Poland between Germany and the USSR), occupied an important place in the ideological struggle. Katyn soon turned into a common Polish national idea, on the wave of which certain movements rushed to power.

And today the legend of Katyn is a propaganda weapon in the struggle for political dividends, and all available methods are used in the fight, including falsifications, lies, double standards.

The desire of the Russian leadership to improve relations with the West could motivate a kind of bargaining: we repent for an imperfect crime, and not our own, but Stalin’s, and the West and Poland stop escalating this topic. This calculation, if any, failed. The theme of Katyn not only has not died out, but is gaining strength. And the Russians, once succumbing to pressure, are being accused of other sins, for example, in the plane crash of the plane of the President of Poland in the Smolensk region on April 10, 2010.

The position of modern Warsaw in the Katyn conflict was frankly expressed by Andrzej Nowak, a professor at the Jagiellonian University in Krakow: “If the historical direction of Polish politics does not solve the problem of Katyn, does not achieve its recognition as a symbol of one of the two biggest crimes of the 20th century – the crime of communism, we will not only betray the memory of killed in the East, but we will miss the chance to get a worthy and stable place for Poland in Europe.”

For the Polish elite, the repentance of Russia is not an end in itself. The Katyn tragedy has become an important part of the national propaganda and ideological system. At the state level, mourning events are held, the Poles are renaming squares and streets, perpetuating the victims and heroes of Katyn. On the wave of Russophobia, the memory of the victims of fascism is being erased.  Monuments of gratitude to the fallen Soviet soldiers and busts of the commanders who liberated the country are being demolished. On this background, some Russian politicians are ready to continue to repent for everything that our ancestors did and did not do.

But there is a rethinking of history in our society. Today Russia not only repents. Russia blames. There is a stand at the entrance to the Katyn Memorial dedicated to the thousands of Red Army soldiers tortured to death in Polish captivity. Well, we are so far talking about the Soviet-Polish War of 1919. But Down and Out trouble started!

Sooner or later, all documents, facts and evidence in the Katyn case will be studied. Truth will prevail. However, the process of normalizing relations between Russia and Poland should go ahead of historical research. As Wojciech Jaruzelski said: “Yes, there was such a page in our history. There was a common tragedy, but then there was a common struggle and a common victory.”