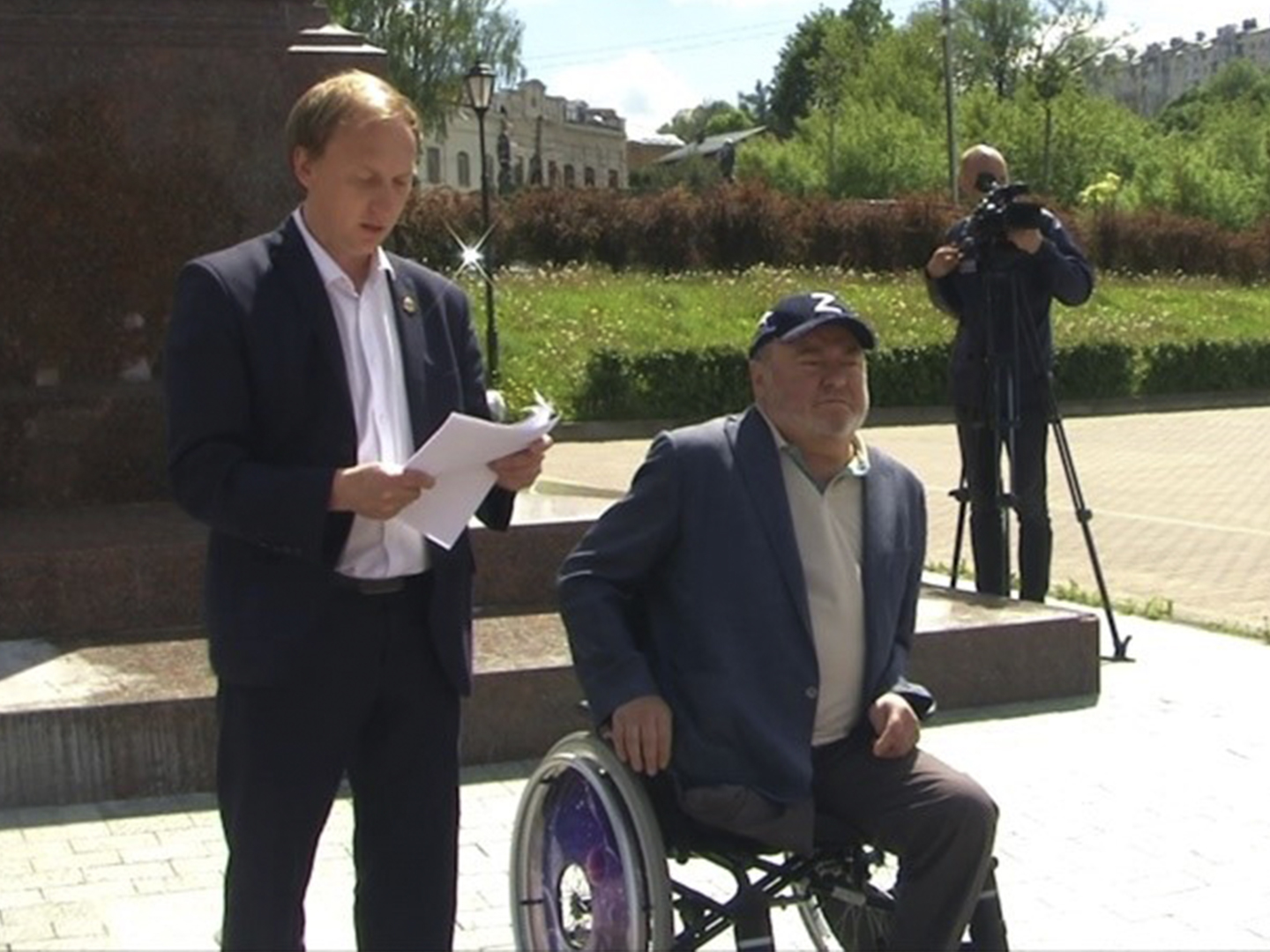 Dmitry Samokhvalov, the Chairman of the SRO RVIO

“One of the objectives of this event is to perpetuate the memory of the heroic defense of Smolensk under the leadership of the governor Mikhail Borisovich Shein, as well as the city’s residents who sacrificed their lives for the glory of the Fatherland.”

Dmitry Samokhvalov and coordinator of the Board of Trustees of the Reconciliation Foundation Vladimir Shargaev told young people about the heroism of the Smolensk residents, about the importance of the Smolensk defense in overcoming the time of troubles, as well as about the connection between the events of the 17th century and what is happening today in the land of Donbass and the Ukraine.

The mournful date in the history of our city and the relationship between Russia and Poland in different historical eras was also discussed at the Scientific and Practical Conference held within the walls of the Historical Museum. The moderator of the forum was Oksana Kornilova, the lecturer at Smolensk State University, Candidate of Historical Sciences, the member of the RVIO.

“We know that the Smolensk land has always been a border area, has always guarded the western borders of our state. This was a very developed economical area. And it is no coincidence that for many centuries the Polish state had a grudge against Smolensk, it wanted to seize these lands for itself. We all know and love our Smolensk fortress wall, which is a symbol of the opposition of the Commonwealth. But a fortress, bricks and stones is one thing, it is a mechanical defense against enemies. It’s all about, of course, the people who resisted the aggressive policy of the Poles.

The 20-month siege of Smolensk by the troops of Sigismund is marked in history as an example of racial and religious genocide.

It is well known how the intervention ended – it was the complete expulsion of the invaders, and in the historical perspective, the disappearance of the Commonwealth from the political map of Europe. But as soon as Poland was reborn in one form or another, a potential aggressor reappeared on the European continent, trying to profit at the expense of its neighbors. As Moscow journalist and political scientist Aleksey Kochetkov noted, Churchill even called her a “European hyena” for Poland’s behavior between the two World Wars.

“The newly formed state, this “geographic news” or, as Molotov said, “the ugly offspring of Versailles” managed to bite off all its neighbors. In a short period of time, Poland fought and took something away from almost all of its neighbors: from Germany in the early 20s, from Lithuania, the Vilna region, from Czechoslovakia, the Teshinsky region. In practice, it really was the “hyena of Europe.”

But most of all, the teeth of this “hyena” itched, according to centuries-old tradition, on the eastern neighbor. The Poles did not fail to take advantage of the weakness of the young Soviet Republic in order to tear off a piece of Ukraine and Belarus in the early 20s, they destroyed Soviet people and the so-called soldiers of the Home Army, operating during World War II on the territory of the Polish General Government and in the Western regions of the USSR occupied by the Germans. Although nominally, the task of fighting the Nazis was set before the Home Army.

“To a greater extent, they were engaged in anti-Belarusian terror, because the installation of the Home Army, its leadership and the London government was just to clear space in the Russian territories so that when a direct clash with the Soviet Army began, the Soviet Army on these lands had minimal support. Therefore, with the hands of the Germans, they destroyed, when they could, the Soviet partisans. How they did it is clear. Having a wide branched network among the Polish population, which they also terrorized and forced to help under the threat of reprisals, finding out the location, location and structure of the Soviet partisan detachments, they passed this information on to the Germans. Plus, the Poles actively created auxiliary police, they participated in it, just like the Ukrainians in Western Ukraine. And the fact that now they refuse it is a lie. This is documented. There are even recollections of the members of the Home Army themselves.”

The Poles fought against the Russians and openly, as part of the Wehrmacht. According to historians, there were 650 thousand of them, that is, five times more than in the Polish armies created in the USSR to fight fascism on the basis of the Tadeusz Kosciuszko division.

“There were 62 thousand people of Polish nationality only in Soviet captivity. It’s a whole army. If we assume that the number of prisoners is 10% of the total number of belligerents, we are just reaching the figure of 600-650 thousand people. On the side of the anti-Hitler coalition of Poles at different times from 75 to 150 thousand people fought. So let’s compare how many of them fought for the Germans and how many fought against the Germans.

Corr.:   After the war, Katyn became a symbol of confrontation between Russia and Poland. The fact of the execution of Polish officers by the NKVD troops, which is disputed by sensible historians, became an occasion for ardent anti-Soviet and anti-Russian hysteria, which ended during perestroika with the ideological capitulation of our side. This is evidenced, first of all, by the Polish orders placed at the entrance to the Katyn Memorial.

The ” Virtuti Militari” Order in Poland was awarded to those who were particularly distinguished in the fight against Russia at different times: in the Russian-Polish wars, in anti-Russian uprisings, in anti-Soviet actions.

“When the Katyn Military Cemetery was opened in 2000, the “Virtuti  Militari” Order was also placed at the entrance. The question arises: if this is an anti-Russian, anti-Soviet order, how was it established, whom was it agreed with?

Alexander Statsura expressed the opinion that has developed among the patriotic Smolensk people nowadays.

“Shouldn’t we bring to our opponents that we are no longer engaged in the game of giveaway. And if we now initiate the dismantling of these symbols,  it will be right.”

Alexei Plotnikov, the main invited person of the Scientific and Practical Conference, Doctor of Historical Sciences, is sure that we need to go even further.

It’s time to put an end to the ideological sabotage called Katyn. And, no matter how much it surprises many people, this opinion is the official point of view of our state. Several memorandums sent by the Russian Ministry of Justice to the European Court of Human Rights are the proof of this. So far, these documents have not been widely advertised.

“A fundamental decision was made to put these documents into the spotlight, that is, to publish them so that they once again confirm what has been known for a long time. In the memorandums of the Ministry of Justice, which reflect and cannot but reflect the official position of the Russian Federation, it is written in black and white that the Memorial Complex in Katyn was designed and manufactured in Warsaw without obtaining any permission from our side, that is, it was made unofficially. And there comes a very important phrase: “For this reason, the information contained there cannot represent any legally significant facts for us.” This is such official legal language, but it means the following: “In the dashing 90s, you arbitrarily erected (by the way, it is interesting to find out who contributed to this) Memorials in Katyn and Medny without approval, without obtaining official permission. What does this mean? This means that these memorials are illegal.

The name of the Memorial itself is illegal, according to Alexei Plotnikov and many other historians. It happened so that today two words are in use: Katyn as the name of a settlement in the Smolensk region, derived from the word “roll”, since the settlement was on the way “from the Varangians to the Greeks”, and Katyn formed from the Polish word “kat”, which means “executioner”. This word was turned by Polish propaganda not only into the name of the memorial in the Kozy Gory, located at a considerable distance from the village of Katyn, but also into a symbol of the endless guilt of Russians before the Poles, a symbol, as it was clear before the notorious Gorbachev folder, and as it has again become clear now, not supported by anything. And the people of Smolensk, according to Alexei Plotnikov, should follow the example of the people of Tver with their attitude to the memorial “Medmoye” – the same historical linden tree as Katyn, or rather, Katyn.

“We are now very actively working, as I call it, the Mednovsky Front. Mednoye is the second, completely brazen falsification of the Katyn case.

If in Kozy Gory one can still talk about something, because 4200-4300 corpses were exhumed (with a Burdenko commission there were 5000), then in Mednoye it is an absolutely brazen falsification. But there is the same memorial complex, with the same signs, on which more and more so-called “living Katyn” people appear, in this case, “live Mednovites.” Those who were supposedly shot there, supposedly lying, were in fact alive and well for many years, or at least months later. In this regard, the “Mednovsky Front” is very active. A few years ago, the infamous signs were removed,

which were again screwed by impudent Poles without any agreement with us on the building of the Medical University in the city of Tver. They were taken off in public, under the camera. And the next step was taken quite recently. It was announced that allegedly shot Poles, police officers and quite a few officers were in the Ostashkovo camp on Lake Seliger, in the monastery. So, thank God, two huge granite boards were recently removed from this monastery, on which this Mednoye-Katyn lie was reproduced: that the heroes of Poland were martyred here, who later died as martyrs. The decision of the prosecutor’s office was made, and I consider this fact to be very important.

I would like to wish the same to the city of Smolensk and express my hope (and there will be a full support from the RVIO) to remove this anti-symbol Katyn finally and name this cemetery toponymically correctly: to rename the Katyn Memorial into the Kozy Gory Memorial.  This completely natural renaming will be the first very important step on the main “Smolensk Katyn Front”.