Yuri Soloponov: This material was the result of a meeting with Vladimir Alekseevich Shargaev in April 2022. The first part of it was placed on the air of Smolensk TV channels and on a number of Internet resources. The second was waiting for its turn, but circumstances decided otherwise.

Vladimir Alekseevich. These are your words, your thoughts, your pain for your native Smolensk region: somewhere in direct speech, somewhere in the author’s retelling.

Corr.: On April 10, an action was held in Smolensk, which had a wide public outcry, both in Russia and abroad. Construction equipment demonstrated the ability to demolish the inscription at the entrance to the Katyn Memorial, but did not do this. 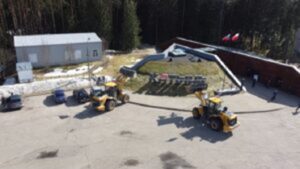 In a distributed statement, the protesters noted that their action was a response to the demolition of monuments to Soviet soldiers-liberators in Poland. Among the numerous comments on the incident there was one of a high-ranking Russian official who noted that…. “the Katyn Memorial is a Russian museum with the graves of Polish prisoners of war and Soviet citizens. No matter how disdain we treat the current Polish authorities, demolishing monuments to soldiers-liberators, we ourselves are not at war with the dead. We have a different culture. The Russian one. ” Well, the official is certainly right.

As a matter of fact, the participants of the action did just that. Unlike the Poles, whose equipment can hardly cope with Soviet monuments, the Russian builders had every opportunity to raze the inscription to the ground, but they did not do it. As they don’t fight with the dead, and as well as the Memorial is still ours, the Russian one. Although in recent years it was the Poles who acted as owners here, arranging at the cemetery, which, in fact, is a memorial, not memorial services, but anti-Russian rallies, turning the Memorial into an anti-Russian tribune. However, to be convinced of this, it was not necessary to attend these rallies. You can just pay attention to the Polish orders located at the entrance.  The Virtuti Military Order. 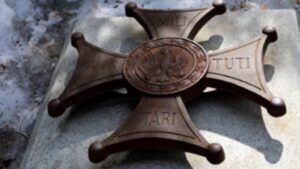 It was established by the Polish king in honor of the victory over Russian troops in the battle of Zelentsy in 1792. They were awarded for outstanding feats shown in battles against the Russian state. Among those awarded there were participants in Polish rebellions in the Russian Empire, the Poles from the Napoleonic Army, the White Poles who captured Vilna, Minsk, Lviv, Kyiv and other Soviet cities in 1920, people who distinguished themselves in anti-Soviet activities after World War II. The presence of the order at the Katyn Memorial is a symbol of another Polish victory over Russia. Which one? The answer is obvious: ideological. Here, nominal owners for many years silently and meekly listened to the angry tirades of guests, endless demands to repent, and sometimes open threats of revenge. Today, when the true goals of an unfriendly state are no longer hidden, it is time to listen to the voices of those who seek to tell the truth about the Katyn tragedy.

Vladimir Shargaev, public figure:  Here we need to figure out where this sabotage came from. And what was it needed for? No one denies that Goebbels became its author in 1943. The question arises: why?

Corr.: This question was answered by the author of the idea himself, the fascist ideologist Goebbels. Katyn will become a mine for 100 years, he wrote in his diaries. Having trumpeted to the whole world about the Polish officers who were allegedly shot by the NKVD in the 40th year, he drove a wedge into the already difficult relations between Poland and Russia. And the name came up with the appropriate one.  Not Kozy Gory, where the tragedy took place, but Katyn, located a few kilometers away. Just kat which means executioner in Polish is very much in line with the idea.

Shargaev: In 1944, after the liberation of Smolensk, a commission led by Academician Burdenko conducted an exhumation as part of the documentation of all the atrocities of the Nazis on the territory of the Smolensk region. Some people complain that they paid little attention to Katyn. The goal was not only Katyn. The Germans destroyed a huge number of Soviet citizens in different places. And in the presence of foreign journalists, it was proved that the corpses were no more than a year and a half old. The exhumation was in 1944. That proved that they could not be shot in the 1940s.

Corr.:  The tragedy in Kozy Gory became the subject of proceedings at the Nuremberg Trials. The judges were inclined to the version of Academician Burdenko, but the final point was not set.

Shargaev: The Nuremberg Trials clearly accused Nazi Germany of atrocities in Katyn. The only thing that they then began to cling to was that one of the specific culprits did not correctly write down the title and surname and instead of the communications regiment they named the construction regiment.

Corr.: The tragedy seemed to be forgotten, while Poland and the USSR coexisted peacefully within the framework of the Warsaw Pact and the Council for Mutual Economic Assistance. Everything changed with the beginning of perestroika. One day historians will get to the bottom of the reasons that forced the last leader of the USSR to transfer the so-called folder No. 1 to the Poles: was it a desire to appear before the West as a true democrat, the expectation of any preferences and handouts? One way or another, but the trump card fell into the hands of the historical antagonists of Russia. 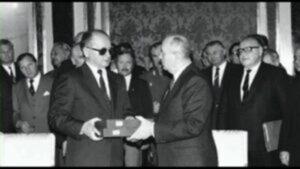 Shargaev:   A question was raised, the so-called “Gorbachev’s File No. 1” was raised, in which it was allegedly proved that in 1940 the NKVD officers shot Polish officers who were in our captivity, who were brought from other camps. As if the forests there were rare, and they could not shoot there. This is a very big provocation. But when a big provocation is being prepared, as a rule, the organizer of the provocation makes mistakes in the details. When you read the documents on the execution that the Germans collected, it is clear that they missed a small thing.  There is a road that connects Vitebsk and Smolensk 100 meters away from the place where the grave is located. It is between Katyn and Gnezdovo. So, in order to carry out a mass execution in this place (and someone heard shots there, allegedly), it is necessary to put up a cordon from the Dnieper, since there were pioneer camps and a recreation area, and most importantly, to block the road between Katyn and Gnezdovo. Can you imagine that people are driving by or walking and suddenly, 100 meters away, soldiers are shooting someone.

Corr.: The authors of the presented fakes did not take into account such nuances, but in some places they made outright historical bloopers.

Shargaev: Such as a copy of the document from Gorbachev’s folder. This is Shelepin’s famous note, handwritten for some reason. Could the typing machine break down, or his secretary get pregnant. “The entire operation to eliminate these persons was carried out on the basis of a resolution of the Central Committee of the CPSU of March 5, 1940.” Does it seem to be all right? But there is a little nuance. In 1940 there was no Central Committee of the CPSU. There was a Central Committee of the All-Union Communist Party of Bolsheviks. Relatives of the allegedly shot Poles handed in an application to the European Court of Human Rights. They presented folder No. 1 as the evidence. The ECHR recognized these documents to be falsified.

Corr.: There is another version. The author of the fakes put obvious bloopers into them deliberately so that in the future, when the time of groveling in front of the West has passed, they could be more easily exposed. And such a time has come. A muddy foam from the Kozyegorsk tragedy is gradually blown away. It has been repeatedly proven that the plaques installed on the Memorial do not correspond to reality. Often the executed were resurrected and seen in other places. Evidence that the atrocity was committed by the Germans was simply ignored. And sometimes a clear lie was presented as the truth.

Shargaev: In Mednoye, in Tver, there is generally a blatant injustice. The murder of not a single Pole has been proven there. There is a hospital burial. But they arrived and put 6.5 thousand crosses with surnames. Here, in Katyn, tablets were made in Poland and were not agreed with anyone in Russia. It was just such a time, the 90s. They considered that they had already conquered Smolensk. Let’s start with Kozy Gory, soon we will be on the Shane Bastion.

Corr.: Since the time of Burdenko, science has stepped forward. Today, the time of death of the victims, and even their nationality can be easy detected. But the Polish side does not make contacts on this issue.

Shargaev: When we held a conference, which was called “Katyn. Tragedy and farce. Truth and fiction, ” on July 1, 2014 at the historical museum in Smolensk, only one representative of the Polish House came from the invited Poles, and there was not a single historian with an evidence base. We have repeatedly turned to the Polish side with a proposal to conduct scientific research. Moreover, we have another grave that was not exhumed by either the German expedition or the Burdenko commission. The Polish side was offered a joint exhumation, but it did not react in any way.

Corr.: There was only one reaction. Every year, with every arrival of the new delegations, the degree of anti-Russian rhetoric that sounded from the lips of Polish officials increased growing.

Shargayev: The Polish side used this grave for political purposes. And then I came to the conclusion that the Poles do not need the Polish bones that lie there. They need a bonfire near their beloved Smolensk. They want a bonfire, not memorial bones.

Corr.: The demolition of monuments to soldiers-liberators is a clear confirmation of the selective sorrow of Polish politicians for the dead compatriots. And that’s not a caveat. Together with Soviet troops, the 1st Polish Army, formed on the basis of the Tadeusz Kosciuszko Division, participated in the liberation of Poland from the Nazis.

The Soviet leadership allowed the Poles to give the division the name of the worst enemy of Russia, captured by Suvorov, because in this war our peoples fought together with the common enemy. On January 16-17, 1945, the division, together with other units of the 1st Army of the Polish Forces and two Soviet armies, participated in the liberation of Warsaw, while the soldiers of the Tadeusz Kosciuszko division were the first to enter the city. According to today’s version, they became invaders. Many of them died, but this does not matter to the Poles, because they were not killed by the Russians. And the monuments must be demolished. Citizens of Smolensk did not touch the Memorial. Because the dead are not at war. Moreover, the time when Katyn is positioned as a symbol of an ideological victory over Russia is coming to an end.